ABS brakes on motorcycles are superior on gravel

The Swedish Motorcyclists Association and member magazine MC-Folket did a brake test with adventure bikes on gravel in the autumn 2020. The test showed that ABS always led to more controlled braking, regardless of whether the rider was experienced or a beginner on riding a motorcycle on gravel. The ABS brakes also led to shorter braking distances.

One fifth, 20,200 kilometers, of the Swedish road network are gravel roads. It is become popular to ride on these road aswell as riding motorcycles designed for these roads. Thus it is important for SMC to test safety systems on gravel.

- The ABS brakes are still superior in order to be able to make a controlled braking, regardless of previous experience. The ABS brakes also provide shorter braking distances. Noone can brake better without ABS in a panic situation, regardless of previous experience.  A controlled braking means that the driver avoids a crash that could lead to other serious consequenses, says Jesper Christensen, SMC.

The tests showed large differences between the riders  previous experience. The braking distance was almost twice as long for the beginner compared to the gravel enthusiast . The reason for this is that you don’t dare to brake due to fear of locking the wheels. This means that when the experienced rider has stopped the motorcycle at 50 km/h, the unexperienced person is still riding in 34 km/h with a risk of colliding with the obstacle he wants to avoid.

- The test shows that it is important to train riders in braking on both gravel and asphalt. After the test, SMC has started to encourage motorcyclists to participate in courses where you can learn to handle a motorcycle on gravel roads. We plan to complete 50 courses throughout Sweden in 2021, says Jesper Christensen.

- The modern ABS systems are so good that the stability and braking performance work well also on a gravel road even if the setting is for asphalt road. This makes it easier to turn and swerve during a tough deceleration, says Jesper.

SMC and MC-Folket did the first brake test on gravel in 2011 when many thought that ABS brakes didn’t work on gravel. The test showed the opposite, the ABS brakes gave both shorter braking distances and more stable motorcycles. Since then, motorcycles and their safety systems have been developed at the same time as adventure bikes that are ridden on both asphalt and gravel have become very popular. In the test 2020, the performance was measured and compared based on the choice of tires, vehicle setting (gravel or asphalt), with or without ABS and based on the driver's previous experience. Braking and evasive maneuvers were performed at 50 km / h.

Read the entire article about the test in MC-Folket translated to English. 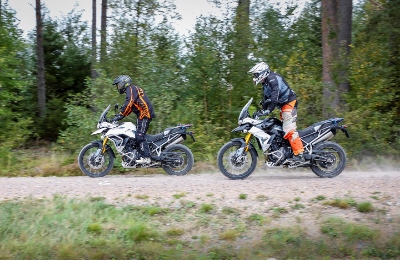 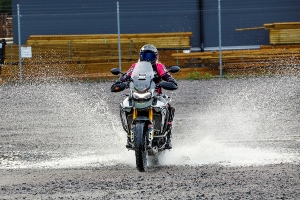 Maria Lind was one of the two test persons. 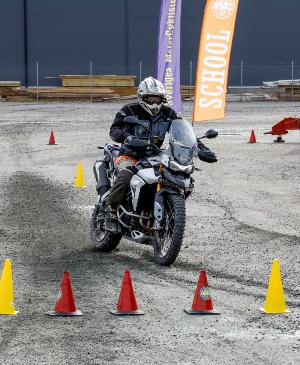 Niklas Lundin was the other one,